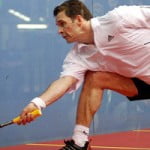 Cliff Martindale is one of the top squash players in the country for his age. The 43-year-old was competing in a Masters tournament in 2008 when his Achilles tendon ruptured. Mr Martindale had Achilles tendon repair surgery undertaken by Mr Mark Davies at the London Foot and Ankle Centre.

Halfway through a match, I pushed forward to reach a drop shot and felt a sharp bolt of pain just above my left heel and collapsed to the floor. I thought my opponent had smashed his racket into the back of my ankle but when I turned around and saw him standing two metres behind me I realised that I had most probably snapped my Achilles.

I wasn’t able to put any pressure on my left leg so limped to my car and drove three hours home (thankfully I have an automatic) to my local hospital’s A&E department.

They confirmed a full rupture and actually wanted to put me in plaster there and then but on the advice of a friend who had suffered the same injury I declined the offer, and decided to see a foot specialist as soon as possible. Mark Davies was recommended to me as the best foot and ankle surgeon, so I met him at the LFAC 2 days later, was admitted to hospital that evening and had my operation the following day.

The night before the operation I slept with an ice boot on my foot which wasn’t very comfortable, but it really helped to reduce the swelling before surgery and the quality of nursing at the Hospital of St John and St Elizabeth was first class.

After a restless night’s sleep I went in for surgery the following afternoon. Mark explained afterwards that I had suffered a complete rupture and the surgery involved pulling the two ends of the tendon together and suturing them together again, a keyhole operation.

I wasn’t ever in any real discomfort. There was some mild soreness but certainly I had expected worse. I was in a half plaster between my foot and knee.

Having stayed in hospital overnight on Tuesday, the day of my operation, I then had a short lesson the following morning from the resident physiotherapist on how to get around properly on crutches before taking a taxi home.

It was really important to keep my foot elevated for the first two weeks and on strict surgeon’s advice I booked the time off work to rest completely.

I was very conscious of doing exactly as I was instructed which basically meant laying horizontal on the sofa or the bed with my leg propped up on a pillow.

I was on mild painkillers and learned to inject myself to keep deep vain thrombosis at bay but I was sleeping well and able to read and catch up on a pile of unwatched DVDs. Looking back, the early days were definitely the hardest, more through boredom and frustration than anything else, but they passed reasonably quickly.

Two to four weeks after surgery

My plaster came off after two-and-a-half weeks and was replaced with a special Aircast walking boot, which allows the foot to be set at an increasingly reduced angle to keep the newly repaired tendon at the correct tension, and should always be worn even when in bed.

It was a huge relief to be out of plaster though and I was able to get around fairly well on crutches but was still non weight-bearing.

I went back to work after two weeks as I am desk based, and was fortunately able to secure a parking place close to my office as I work in the city and public transport would have been highly impractical.

Four to eight weeks after surgery

At four weeks I was partial weight-bearing and began physiotherapy which at first involved just deep tissue massage and ultrasound but progressed quite quickly to basic resistance exercises. I took my first steps without crutches just before Christmas, eight weeks post-op, which felt fantastic.

From the very beginning Mark gave me confidence that it would be possible to play squash again at the same level as before, but told me a successful operation is only half the battle.

A full recovery is dependent upon how much work you’re prepared to put in yourself afterwards, in conjunction with a good physiotherapist.

Two to six months after surgery

At 10 weeks I no longer had to wear the boot, and was allowed to go swimming and cycle lightly. It’s amazing how quickly muscle atrophy sets in, particularly when a tendon has been severed, so I began weight training to build up the wasted calf muscle.

By 22 weeks I was allowed to do as much cycling as I wanted, although I still had to avoid any running, and at 24 weeks I went skiing and was able to ski quite hard. It was the first time I felt confident that I was really on the road to recovery.

I continued cycling and gradually increased weight training on my leg muscles throughout April and May but had to hold off until June before being able to go jogging.

I was finally allowed back on a squash court in week 30, but only for practice routines involving predictable movement, not to play matches. Finally in week 36 I started to play competitive squash again.

By this time my physio had put me through a number of gruelling sessions in the gym simulating the unpredictable nature of squash movements and so I had no doubts about my leg.

Before my injury, I was ranked number 2 in England for the over 40 age group and trying to regain my fitness has been a long, hard process, but as I write this just over one year later I’m back to playing competitively 3 times a week and experience no soreness whatsoever even following a really tough match.

My left ankle is slightly stiffer than my right when fully stretched but I am told that is purely down to scar tissue and will dissipate over time.

What would your advice be to someone with a similar problem?

Bizarrely, my father suffered exactly the same injury at exactly the same age also playing squash, and like me had no previous history of Achilles problems, so it’s probable that genetics could have played a role. Obviously my age and the sport I play were also contributing factors.

As a result of poor surgery and not following a disciplined rehabilitation programme my father continued to have problems for many years afterwards, and that was very much on my mind – you only have one chance to get it right.

So If you are unlucky enough to rupture your Achilles then my advice is to find the best surgeon you can, listen to your physiotherapist, put in the effort and it should be possible to make a full recovery in 6-9 months.

The London Foot & Ankle Centre remains fully OPEN for foot and ankle treatments at The St John & St Elizabeth Hospital, The Shard, The Bupa Cromwell Hospital, The New Victoria Hospital, The Lister Hospital, OneWelbeck & Chiswick Outpatients
All of our Consultants are available for face to face appointments and remote appointments.
Call 0207 078 3800 for Mark Davies, David Redfern, Matt Solan & James Davis, and 0207 403 4162 for Martin Klinke
Our two Podiatrists – Anthony Kontos and Nicolas Ivanoff – have clinics at The St John & St Elizabeth Hospital and The Shard.
Please CLICK HERE for our new clinic opening times for all of our Consultants and Podiatrists
toggle
Toogle Down