Richard Campin is a 48-year-old from Kent. Mr Campin had surgery at the London Foot and Ankle Centre to repair his peroneal tendons and stabilise his ankle. Mr Campin, who works in financial services, describes his treatment and recovery. His operation was undertaken by Mr Mark Davies in April 2009.

I’ve always been very active ‐ running marathons, playing tennis, skiing and mountaineering. I sprained my ankle a couple of times and it became progressively weaker and hurt after sport. I saw my GP and a physiotherapist who both thought something wasn’t quite right. I was then referred to a general surgeon who advised me to see Mark Davies at the London Foot and Ankle Centre.

Why did you decide to have surgery?

If I had left it without surgery, I would have endured more ankle sprains and my right foot would have become weaker and weaker. Sport is a big part of my life and my view was surgery would be an investment. It would take time, but enable me to do the activities I enjoy. I prepared for it by ensuring my operation was scheduled for a fairly quiet time at work and setting myself up so I was able to work on some projects from home after surgery.

How did you feel immediately after surgery?

I was in some discomfort but no real pain at all. Mr Davies urged me to get up as soon as I could and I was quickly able to sit up in bed. I spent one night in hospital then returned home in a plastercast.

You must not do any weight bearing at all in the first two weeks and for the first few days, I felt pretty tired and spaced out from the surgery and anaesthetic. I did go into London for a work meeting during the second week and it was awful – the best thing you can do is stay at home and rest. I was able to work from home and also read a few book, so I was able to pass the time easily enough.

Two to four weeks after surgery

One-and-a-half weeks after my operation, I brought in a personal trainer to work with me at home. I was able to do upper body aerobic work and leg raises even at that early stage. I knew that to make the best recovery possible, I needed to eat healthily and keep myself as fit as I could. I had to inject myself with anti-coagulants every day which was a little unsightly, but not a big deal. My plastercast came off at two weeks and I started wearing an Aircast boot.

Four to eight weeks after surgery

At this stage, I was able to swim and do a little weight bearing. I felt very nervous about putting weight on my foot, but gradually became more confident. Mr Davies had told me what to expect in terms of my recovery and he was absolutely right in his predictions. It takes a lot of self-discipline to take your time and not rush the recovery. At one month, I could walk unaided for a very short distance at home. For the second month after surgery, I gradually progressed from going out with two crutches, then going down to one, then a walking stick. By two months, I could manage without the walking stick. I did a lot of work with the excellent physiotherapist recommended by Mr Davies to make sure my leg muscles were not wasting and to keep my foot mobilised.

Two to six months after surgery

By this stage, most of the swelling had gone and I was able to walk up hills. I found it helped to wear a good, stiff pair of walking boots. It really felt that my recovery was on the right trajectory and I was getting closer to where I wanted to be. I was swimming 10km a week and by six months, I was on the treadmill in the gym and doing spin classes.

I would say that by six months, I’d made a very good recovery but it probably took a year for optimal recovery. Now I have no pain at all in my right foot; not even the smallest niggle. Just over a year after surgery, I climbed the Cuillin Ridge in Skye and now I am planning to do the Matterhorn in August. Equally, I can really enjoy playing football again with my 14-year-old son.

What would your advice be to someone with a similar problem?

Surgery has been an investment for me ‐ I think you have to regard it in that way. You have to be quite disciplined around your recovery, do your physiotherapy, training and watch what you eat. If I was less active, I might have carried on without surgery, but it was clear that if I wanted to carry on doing the sports I love and avoid arthritis in the long term, I needed to make this investment in surgery and it has most definitely been worthwhile. 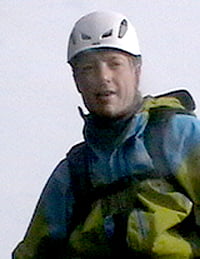