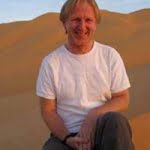 Nic Madge, a circuit judge and keen traveller, describes an injury he suffered in an extremely remote location and the challenge of finding the right diagnosis. An Achilles rupture is not necessary a ‘snap’ and can be missed, even by doctors, before it was diagnosed at LFAC. Nic describes his experience.

We were trekking with a guide in a remote part of Tajikistan, close to the Afghan border. Late in the afternoon, close to the herder’s felt covered yurt where we would spend the night, there was a wooden bridge over a small stream. As I walked over the bridge, some of the planks gave way. I fell through the bridge. My foot hit the rocks in the stream bed, a metre or so below.

My foot was very painful, but I limped on to the yurt. When I removed my boot, my right ankle was very swollen. The next morning I could still place weight on my foot, but there seemed to be no flexibility in the ankle. I was worried that I had fractured a bone. There was no town and no doctor anywhere close. We arranged to be driven in a four wheel drive Toyota Land Cruiser back to civilisation. A couple of days later, in Bishkek, the capital of Kirghizstan, I bought powerful pain-killers over the counter in a pharmacy. I did not consult a doctor there. We were due to fly home the next day and I decided it was better to wait and see a doctor in England.

Back in England, I went to the casualty department at my local hospital. My ankle was x-rayed. I was relieved to be told that there was no fracture. A doctor told me that my ankle was badly swollen, but it would be better within six weeks. She never mentioned that I might have damaged or ruptured my Achilles tendon. I asked whether I should rest it (to avoid further damage) or walk on it (to avoid it seizing up). I was told that I could walk on it.

For the next five weeks, I tried to go about my normal life. I drove to and from work. I limped about and went for short walks, but my ankle was not improving. In the sixth week, I went to see my GP. I told him that I had done research on the internet, and it seemed likely that I had ruptured my Achilles tendon. He told me that was impossible. It would be far too painful for me to walk. It would get better. I asked to be referred to a consultant. Reluctantly, he agreed. I asked how long I would have to wait for an appointment. He said weeks.

Back home, I asked a friend to help me carry out the Thompson Test. I lay face down, with my feet hanging off the edge of the bed. She squeezed my right calf. There was no movement of the foot. (Normally there would be plantarflexion.) It was indeed likely that I had ruptured my Achilles tendon.

I was not prepared to wait weeks for the appointment with the NHS consultant. A friend recommended Martin Klinke at the London Foot and Ankle Centre. A few days later I paid privately for an MRI scan. The next day I saw Martin. He confirmed that I had ruptured my Achilles. He could operate the following Monday.

When I came round from the anaesthetic, Martin told me that the operation had proved to be more difficult than normal. The two ends of the ruptured tendon had moved so far apart that it was impossible to stretch them so that they could be joined. So, Martin had removed tendon from the sole of my foot and used that to rejoin my Achilles.

Recovery was straightforward, but predictably slow. For four weeks, my ankle was immobilised, initially in plaster. I had to keep my leg horizontal most of the time. I progressed to a Beckham Boot and tried to exercise by hobbling round the block on crutches. After a month, I started physiotherapy and continued this regularly for several weeks. On a Sunday evening, I was driven to a deserted supermarket car park and successfully tried a couple of emergency stops. Seven weeks after my operation, I could drive again.

That was all five years ago. Despite a significant birthday last year, I can do everything that I did before I ruptured my Achilles. I am told that my right calf is still noticeably smaller than my left calf, as a result of muscle wastage when I could not weight bear, but I can feel no difference. I have resumed all my former outdoor activities. I continue to trek in remote parts of the globe. Since my operation, I have hiked up the Baltoro Glacier to K2 Base Camp close to the Pakistani/Chinese border (16,423 feet above sea level); I have climbed Mount Elgon (at 14,177 feet asl, the second highest mountain in Uganda); I have summitted Mount Toubkal (at 13,671 feet asl, the highest mountain in North Africa); and, last summer, I spent three weeks trekking in the remote Nepalese mountain kingdom of Mustang, near to the Tibetan border. I go skiing every year. I’ve bought snow shoes and now go hiking in the Alps in winter.

I remain incredibly grateful to Martin Klinke and his colleagues and, whenever I am up a mountain, I think how lucky I am. I assume that if I had not seen him, I would have suffered permanent damage and my walking would still be extremely restricted. Thank you, Martin.