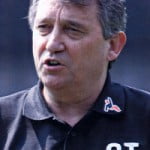 I was playing in a charity cricket match in August 2006. The ball was going past me for a four, so I stopped it with my foot. It was probably a bit daft, but I didn’t want the ball to go for a four.

I was in a lot of pain and immediately knew I was in trouble. But I never imagined that it would be nearly four years before I fully recovered from my injury.

The first specialist I saw diagnosed the problem as a metatarsal injury. That seemed to make sense and was the kind of injury all the best footballers pick up.

But as my metatarsal started to get better, I developed pain in the base of my heel which felt far worse. It was a throbbing pain which was always there, even if I was just walking.

I’ve always gone running to keep fit ‐ I have run marathons and find a run first thing in the morning or in the evening is the best way of clearing your mind of any problems or stress. But running was out of the question because of the pain in my heel.

I saw another specialist who said I had an Achilles problem. When I stopped the cricket ball, I wrenched my heel and although I also cracked my metatarsal, the Achilles injury was the more serious, underlying problem.

Over a period of nine months, I had four steroid injections. They would help with the pain for a short period, but soon the effects wore off. By the fourth injection, something was telling me that it wasn’t right. I complained because I knew the injections were not treating the injury.

In October 2008, I had an operation to clear the heel joint of all the scar tissue which had built up. Pretty soon during my recovery, I knew it hadn’t worked. The same throbbing pain was still there and I just couldn’t see any prospect of it improving.

Having been in football all my life, I’m used to injuries being immediately picked up and treated. You take it for granted. But for the first time, I was really in trouble and I wasn’t sure what to do.

I went back to my old club, Aston Villa, and asked for their advice. They recommended a surgeon called Mark Davies at the London Foot and Ankle Centre. Mr Davies had recently treated Wilfred Bouma who was playing again after a horrific, career-threatening injury. Finally, I felt at home – I was very reassured to know that Mr Davies was working in top flight football and also to know that his focus is entirely on the foot and ankle, rather than general orthopaedic surgery. From the first time I met Mr Davies, I instantly felt very confident in him.

Mr Davies decided to do a second operation in February 2009. Normally, he said he wouldn’t operate so soon after a first operation, but I was in a lot of pain and getting very frustrated about losing my fitness.

There was a long recovery – but Mr Davies had warned me it would take time and I knew what to expect. When you know the injury has been treated correctly, you are happy to follow advice and take it easy because you know things are moving in the right direction.

It took a year before I was able to start running properly again. My fitness has certainly taken a knock after almost four years without running. I’ve had to come to terms with the fact that I need to mix things up, do some cycling and other exercise which puts less stress on the joints. But I do still love to run.

I never imagined one moment in a cricket match would have such an effect on my life. Stopping a four cost me four years of my fitness. It has been a real eye-opener – we are all susceptible to accidents and illness. If you are in football, you will immediately have the best treatment. When I was injured at the age of 61, for the first time, I didn’t know where to turn. My advice for everyone – inside and outside football – is that if you have a foot or ankle injury, make sure your surgeon is an experienced foot and ankle specialist.