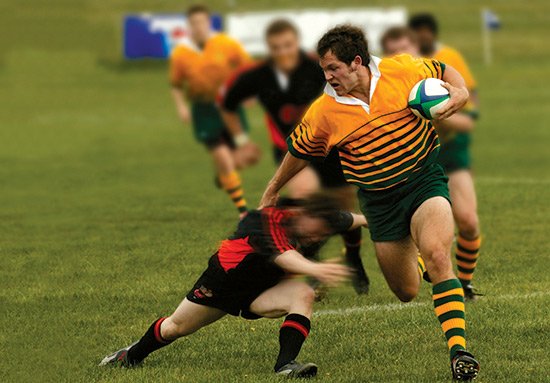 As a foot and ankle surgeon based in the rugby heartland of South Wales, I spend a significant amount of time treating injured players.

I enjoy working with sportspeople; they are highly motivated, and for the surgeon, there is the challenge of getting them back on the field quickly without compromising performance.

But the injury rate is rising: at any point the top clubs have between 20–40% of their players unfit for selection.

In terms of the foot and ankle injuries, lateral ankle ligament sprains and injuries are the most common, followed by Achilles tendon injuries. Like rugby, football is a highly demanding, multi-directional sport.

But it would seem that there has been more success in football in terms of bringing down the rate of ankle injuries. I recently spoke to a UEFA medical official who told me that ankle injuries in football have fallen very significantly during recent years.

Why is football doing better than rugby in this area? First of all, there has been an extraordinary change in the size of rugby players. In 1962, the average England player weighed 85.7kg. By 2012, they were a whopping 104kg.

“At any point the top rugby clubs have between 20–40% of the players unfit for selection.”

This increase is in solid bone and muscle. The problem is that the ligaments and tendons that hold these bones and muscles together have not got any bigger or stronger during those four decades and this leaves rugby players vulnerable to tearing these tissues.

Combined with this increase in size, there is a training issue. Some clubs, particularly at the elite level, have brought in Pilates and training techniques which improve players’ proprioceptive skills and core stability.

Proprioception means, for example, adjusting your balance when you change direction, in order to avoid an ankle sprain. But too often, particularly at lower levels of the game, the focus is overwhelmingly upon building strength and speed, producing players who are increasingly large and vulnerable to injury.

Training to protect your ankle has been proven to reduce the number of in-season injuries and I hope to see this make a difference in rugby.

Of course, injuries will still occur but the latest surgical techniques and rehabilitation protocols are helping to get players back and playing more successfully than in the past.