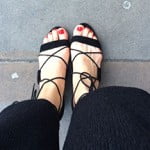 Mr Redfern – I am forever grateful for the amazing surgery you carried out on my foot. I would highly recommend you and the minimally invasive surgery you carry out to anyone considering bunion surgery.

I can’t remember exactly when I started to develop a bunion on my left foot but it definitely became more pronounced and painful in recent months. I had lived with it for quite a while and it was constantly being aggravated by shoes, albeit it sensible ones. Heels had gone out the window a long time ago!

I am quite an active person, doing various sports and it was therefore important to find a long-term solution.

I did quite a lot of research including speaking with friends who have had bunion surgery and I also saw an NHS orthopaedic consultant but the technique and surgery sounded a bit scary and rather intrusive to the structure of the bone and joint.

I then came across minimally invasive surgery carried out and pioneered by Mr Redfern at the London Foot and Ankle Centre.

I felt in very safe hands right from the very first consultation. I really liked the idea of minimally invasive surgery and Mr Redfern was incredibly patient and took time to explain the surgery in detail and what I should expect regarding recovery. I decided there and then to go ahead with the surgery.

The moment I woke up from the surgery I felt fine, my foot was totally anaesthetised. I was given crutches, a special boot (as I could still weight bear) and discharged with painkillers in case I needed them, along with strict instructions to elevate my foot for the first two weeks post-surgery.

As the anaesthetic slowly wore off, I took paracetamol at regular intervals but I was incredibly surprised that the pain was so minimal and manageable, after the first week I no longer needed any painkillers. I was quite disciplined in elevating my foot, as I was told that this helps the healing process and also keeps the swelling down. I had my first check-up appointment three weeks post-surgery which included removing the post-operative bandage and where I caught the first glimpse of my new foot, it was beautifully straight. A six week check-up followed which involved an x-ray and I was able to discard the boot and start wearing trainers.

It is now 5 months since the surgery and my foot is almost back to normal, well actually not normal… I now have a beautiful bunion-less foot with virtually no scarring whatsoever and no pain. I have had regular physiotherapy which has really helped gain mobility around the toe area. I am slowly resuming exercise and barely notice any soreness.

The London Foot & Ankle Centre is NOW OPEN for foot and ankle treatments at The Shard and The New Victoria Hospital from Monday 1st June.
Call 0207 403 4162 for appointments with Martin Klinke
The St John & St Elizabeth Hospital is NOW OPEN fully for foot and ankle appointments – call 0207 078 3800 for appointments with Mark Davies, David Redfern and Matthew Solan
We are also offering telephone and video appointments for all of our Consultants.
Our two Podiatrists – Anthony Kontos and Nicolas Ivanoff – have clinics at The St John & St Elizabeth Hospital and The Shard.
Please CLICK HERE for our new clinic opening times for all of our Consultants and Podiatrists
toggle
Toogle Down